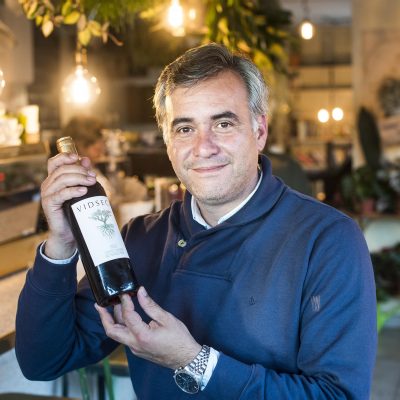 « Many of us are descended from families that have done nothing but grow grapes for four generations. And each grower makes his own artisanal wine. The cooperative makes an exclusive blend form these unique wines. »

Cauquenes is known as the ‘cradle of Chilean wine’. An appropriate home, then, for the young wine cooperative VIDSECA (short for Asociación Gremial de Vitivinicultores del Secano de Cauquenes). An organisation that sprouted when, in August 2015, 22 enthusiastic winegrowers united to tackle the development of their disadvantaged region head-on.

They do so with the production of high-quality, artisanal País wine. A tradition that’s deeply seated in their majestic but bone-dry region. A government fund afforded them the financial means to get off the ground.

The winegrowers believe steadfastly in the need for VIDSECA and its mission. They are proud of their region and their wine heritage. Vines were already planted there 500 years ago for the church wine of the missionaries. Indeed, País vines that have borne grapes for 150 harvests and counting are no exception in Cauquenes.

The País grape is an exceptional variety. It has adapted to the dry soil, sending its roots as far as 18 metres below the ground. Irrigation is not required as the plant can manage for months on the rainwater it receives in winter. Just as well, because the small-scale farmers in this region lack the means to irrigate the vines artificially.

The País grape bears enormous potential in the wine sector’s constant quest for innovation. And no one understands this better than the members of VIDSECA. Many of them come from families that have been cultivating and processing this grape for four generations. Albeit on a very small scale.

Each of the VIDSECA members makes their own artisanal wine at a small vinification facility using indigenous yeasts. Two members have a larger winery with large vats. This is where VIDSECA collects its wine for export.

Its marvellous wine and unique story aside, VIDSECA also deserves support for its lobbying. The cooperative defends the interests of small-scale wine producers both in the region of Cauquenes and across all of Chile.

One of its objectives is to have País wine recognised with a designation of origin. It also secures government subsidies for members that seek to invest in their artisanal winemaking and visits countless trade fairs and other fora to promote the rich wine heritage of the Cauquenes region.

At the moment we sell one product from this partner: